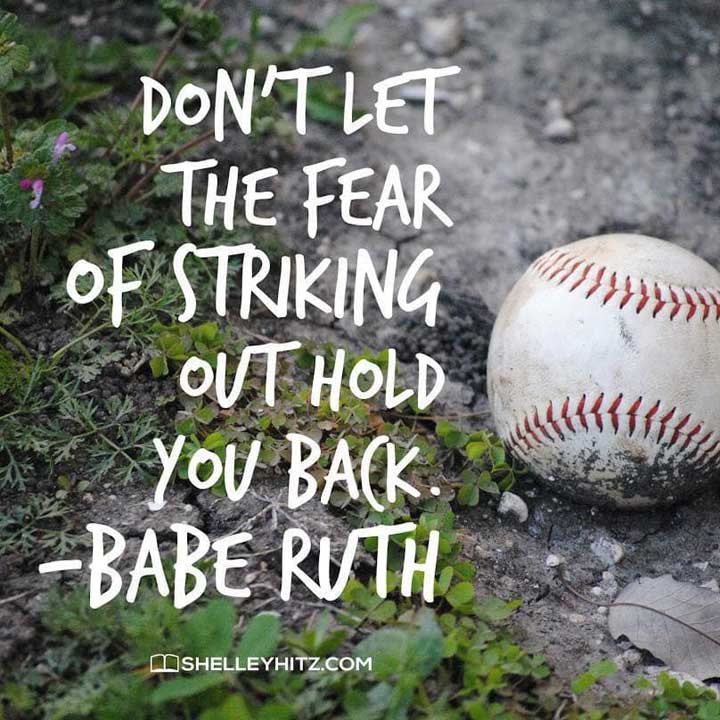 I’m a huge baseball fan. Have been since I was just nine years old. On top of that, I’m an ardent Yankees fan, so the image above really caught my attention.

Babe Ruth is undoubtedly one of the greatest athletes ever to play baseball. He ranks third all time on the home runs list, with 714. His lifetime batting average, .342, puts him tenth on the list of all hitters. Even better, his 2,213 RBIs put him atop all other baseball players until Hank Aaron broke his record. Ruth still ranks number two to this day.

Coincidentally enough, a friend of mine who knows nothing about baseball shared the image above on Facebook. She added the following:

Give yourself permission to confront your greatest fear, because on the other side a new life waits for you. Give yourself permission to grab procrastination by the collar, and say ‘get out of my way.’ Make up your mind to live a life with no regrets. Decide to look all your excuses in the eye and make them stepping stones to your dreams. You owe it to yourself to take a chance on you. Give it your best, and find a way to reach beyond what you think is possible to make your mark. You have something special. You have GREATNESS within you! —Les Brown

Les Brown is a motivational speaker she’s fond of quoting. After reading his statement, you probably understand why. Even though she, and Brown, are far too young to have known Babe Ruth, something tells me Ruth would wholeheartedly agree with them.

Did you know that, for all the greatness Ruth possessed, he also struck out a whopping 1,330 times in his career? In fact, he led the American League in strikeouts five times. And, did you know that he earned the unflattering nickname King of Strikeouts?

However, Ruth was never afraid, nor ashamed, of striking out. He took an “all or nothing” approach at the plate. In fact, he once said, “Every strike brings me closer to the next home run.” That is what makes him great: facing down fear.

Last month, I urged you to get uncomfortable, by pushing yourself to achieve something greater. Doing this means facing fear. More to the point, it means facing down fear.

I have the Ruth quote and the Brown quote on my computer, to remind myself. To push myself. How about you?