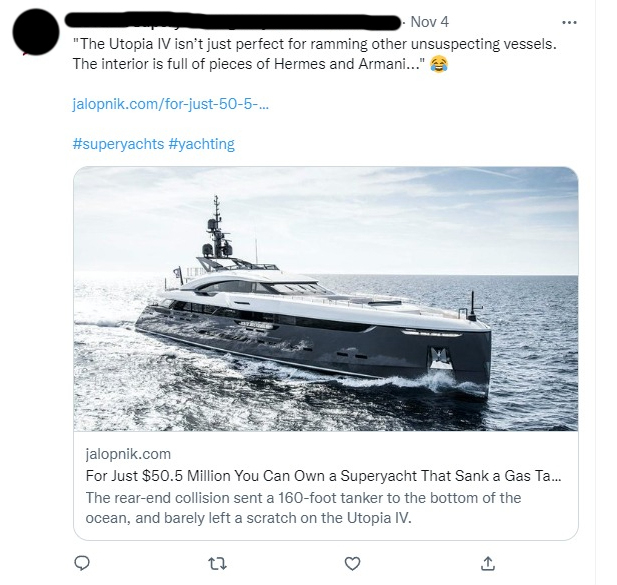 My jaw just about hit the ground when I saw this Twitter post less than an hour after it went live. That was several days ago, and I still can’t believe it’s still online. I’ve blacked out the company name and Twitter handle not to protect the guilty, but to focus attention on what the social media manager did: risk his employer’s reputation.

A little background first. The yacht Utopia IV collided with a commercial ship around Christmastime last year, causing such significant damage to the ship that it sank. Thankfully no one aboard either vessel sustained injuries requiring medical treatment. However, it doesn’t take much to realize a collision with that much force, causing another vessel to sink, is catastrophic. It also doesn’t take much effort to find photos and videos of the incident and aftermath online, despite the article shared in the post asserting the incident “barely left a scratch.”

Which brings me to the publisher of the article, Jalopnik. The website covers cars and all modes of transportation with opinion pieces and, in its own words, “cheerful belligerence.”  That explains the snarky tone of the article. I do enjoy snark myself, but when it becomes callousness toward in serious situations, I find it wholly inappropriate.

Interestingly, the social media manager of the yachting company seems to agree with me. In nearly the same breath, though, he attempts a “yes, but” excuse.

I emailed him to express surprise that he shared the article. He responded, “I accept that the collision itself was, of course, very serious. It was fortunate that nobody was hurt.” He also wrote, “the line, in Jalopnik’s typical irreverent style, that Utopia IV wasn’t just ‘useful for ramming unsuspecting vessels’ seemed an acerbically funny observation. It’s not one I would write in the name of {my employer}.”

Yet he did just that. He posted as his employer, on its official Twitter and Facebook accounts.

Seemingly trying to explain away his behavior, he adds that it  “seemed harmless enough to share,” and that he assumed everyone would realize the “tongue-in-cheek tone.”

This is the social media manager, and manager of essentially all communications at that, for a major yachting company. A company that understands the seriousness of collisions, and which works closely with captains and crew in particular… the same individuals who work aboard yachts like Utopia IV.

I didn’t bother to respond to him. I’m saving my breath for this warning to you: Do you know who’s potentially ruining your company’s reputation?