Home/editorial/The Glamorous Life of a Journalist 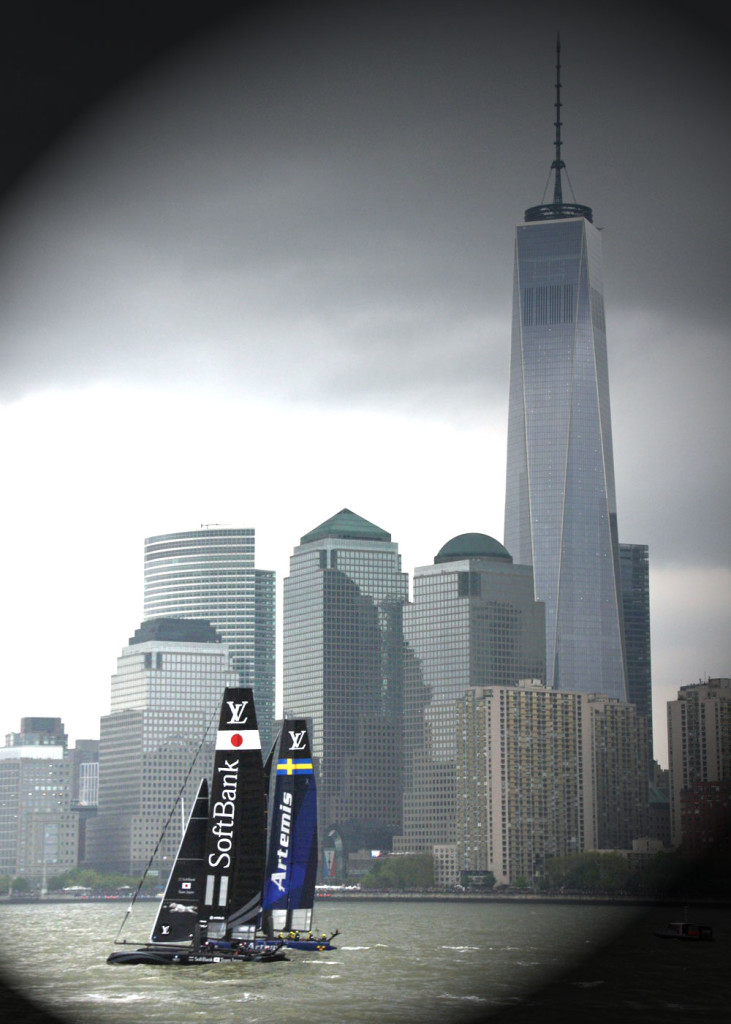 9 a.m.: As I head out the door, the weather is less than ideal for these famed foiling catamarans: winds max at 6 knots. It’s 54 degrees and threatening; I’m wearing two sweaters, plus an insulated jacket. In May. But, the forecast is for some clearing and northeast winds to switch to southerlies, building to 10+ knots. This is going to be so cool. The action! The photos!

12:15 p.m.: The horizon visible from the media center at 225 Liberty Street is brightening. The media coordinators signal it’s time to board the media boat. Their job is akin to herding cats. We make our way through the crowds and to the NY Waterway ferry awaiting us. There’s a distinctive energy among the media, and several of us chat excitedly and trade stories. The action! The photos!

1:30 p.m.: We’re in position on the Hudson River, but the racing buoys aren’t. The course is being reconfigured. With half an hour to go before Race 1 (of 3), Mother Nature isn’t cooperating. Winds are still northerly and decreasing to 2 to 4 knots. Still, the forecast is promising, plus winds were quite variable a few minutes ago. The action! The photos!

1:50 p.m.: Race management says we’re a go! There’s a sustained 4-knot wind, the minimum needed. It’ll be a challenge for steering and not enough for foiling, but hey, we’re 10 to 15 minutes from a race!

2:30 p.m.: The media natives are getting restless. The coordinators kick off a round of America’s Cup trivia and remind everyone the boat has snacks and drinks.

2:38 p.m.: Race management re-configures the course yet again, happily due to a zephyr coming from the west! Hurrah! There will be action! There will be photos!

2:50 p.m.: Did I say westerly? It’s switched to the southeast. The winds aren’t at their typical 11 to 12 knots for this time of day, but close enough for the AC45s to foil as their skippers and crews traverse the shoreline to stay fresh, and entertain the 75,000 spectators. Action, finally! Thank goodness for zoom lenses.

3 p.m.: All our media coordinators’ comms with race management go down. Binoculars keep us up to speed on developments. Menacing-looking clouds roll back in. Another journalist turns to me and says, “It’s getting cooler, isn’t it?”

3:10 p.m.: Race 2 starts, with Land Rover BAR, the British contender, getting off to a strong start.

3:20 p.m.: The America’s Cup Authority only has 40 minutes left to rule the Hudson River. A cruise ship is cooling its heels outside New York Harbor, with a bunch of tugs and barges doing the same.

3:30 p.m.: Due to the desire to get something, anything in, a substitute race starts. It will only count in the standings if one or more of the races tomorrow can’t be pulled off due to the forecasted super-gusty winds. Racing is close and tactical, with a few lead changes, and the foiling AC45 catamarans do indeed get to foil. SoftBank Team Japan crossing the finish line in front, its only first-place finish in the World Series so far.

3:40 p.m.: We’re back at the dock. Miraculously, I’ve taken 161 photos. I eyeball the partyers atop the Dark ‘n Stormy Roof Bar on the race plaza with envy, as I head uptown to catch a bus back home.